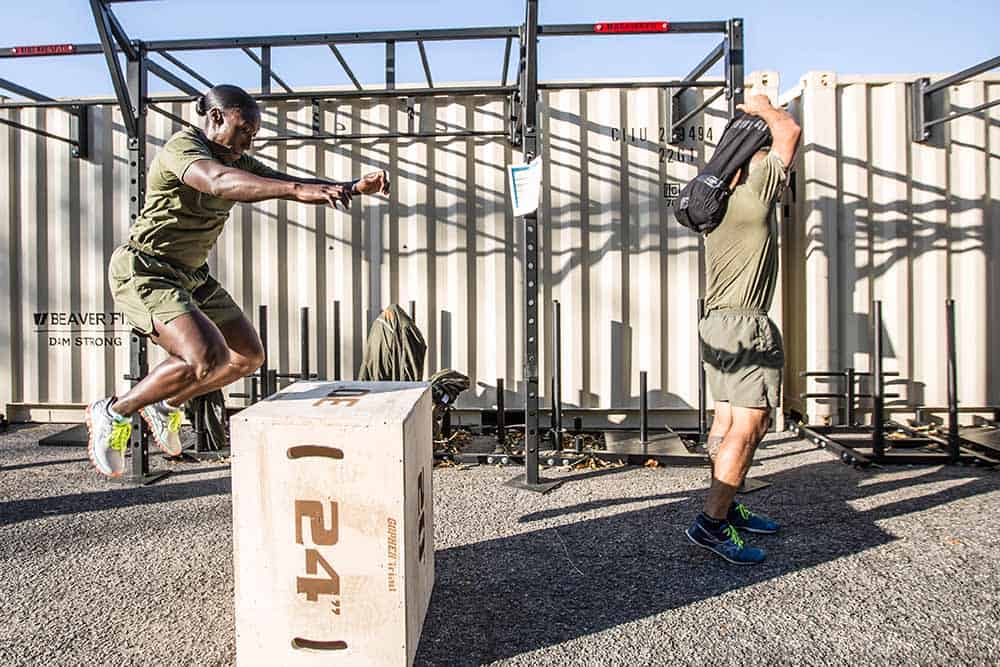 Plyometrics (or simply plyos) is a type of exercise that aims to improve power (the combination of strength and speed).

Plyometrics is an excellent training method for increasing ‘explosive strength’.

Plyometrics is sometimes called jump training. However, it should be noted that plyometrics is not restricted to only jumping-based exercises, even though they are the most common type of plyometrics exercises.

The first stage of the SSC (the eccentric contraction) is often referred to as the ‘pre-stretch’ or ‘countermovement’ action. For example, when preparing to jump, we instinctively hinge at the hips and bend our knees to drop ourselves down before springing up.

For example, when performing a jump squat:

The elastic energy which forms the foundation of plyometrics comes from the elasticity of the musculotendinous unit, which comprises muscle fibres, muscle membranes and tendons.

Elasticity refers to the ability of muscles and tendons to return to their normal length after being stretched.

Tendons are connective tissues or ‘bands’ connecting muscle to bone. The elasticity of these bands, known as the series elastic component (SEC), is widely agreed to be the primary source of elastic energy used in plyometrics.

The elastic energy of muscle membranes is referred to as the parallel elastic component (PEC).

The contractile component is the muscle fibres, which work in parallel with the elastic muscle membranes and in series with tendons (another elastic component) to produce the elastic energy.

Plyometrics aims to take advantage of this reflexive contraction.

Here are just a few examples of common plyometrics exercises:

For high quality plyometrics equipment, we recommend Iron Edge. Make sure you use our exclusive discount code (IE-616) for 5% off your purchase at Iron Edge.

We highly recommend using padded boxes and hurdles, as this greatly reduces the potential risk and severity of injury.

Who would benefit from plyometrics training?

Anyone that wishes to increase their explosive strength could benefit from incorporating some plyometrics training.

However, given the higher impact on joints and tendons, it is particularly important that participants use correct exercise technique.

Given the explosive nature of plyometrics exercises, beginners should only participate in plyometrics training under the supervision of a qualified instructor.

Plyometrics training is particularly beneficial for athletes that require explosive strength (the combination of strength and speed), in sports such as:

For example, an athlete that plays basketball could use plyometrics training to help improve their vertical jump.

Plyometrics poses a higher risk than many other training methods.

To ensure the health and safety of participants, the following guidelines should be considered before undertaking plyometrics training.

Founder of Squadron. For amplified group fitness training visit squadron.com.au. Luke is also a qualified cook, so keep an eye out for his recipes on HealthyLiving.com.au.